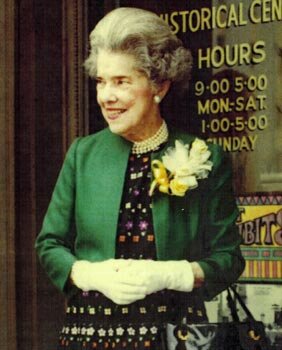 Jean Faircloth MacArthur at the entrance to the Milwaukee County Historical Society during the 1979 MacArthur Memorial Week and General MacArthur Statue dedication.

Jean Faircloth MacArthur played a remarkable and selfless role in the life and career of General Douglas MacArthur. She was born on December 28, 1898 in Nashville, Tennessee, the daughter of an aristocratic Southern family with roots in Murfreesboro, Tennessee. Jean Faircloth moved to Murfreesboro with her mother and two brothers at the age of eight. She became aware at an early age that hers was a family of considerable military tradition and accomplishment. As Douglas MacArthur pointed out in his memoir, Reminiscences, Jean Faircloth’s grandfather was an officer of the 5th Confederate regiment of Cleburn’s Tennessee Division, which swarmed Arthur MacArthur’s 24th Wisconsin at Franklin. Four of her great-uncles fought for the Confederacy, and one became a Chief Justice of the State of Tennessee. Her brothers fought in both World Wars and Korea. As a result of this background, Jean Faircloth had strong ties to the military.

Miss Faircloth attended Ward-Belmont College in Nashville and Soule College in Murfreesboro. After school she traveled extensively, particularly in the Far East. She first met General Douglas MacArthur on the SS President Hoover in 1935 when MacArthur was traveling to Manila to assume his duties as military advisor to Philippine President Manuel Quezon. After visiting friends in Shanghai, she encountered the General again in Manila and after a brief return to Murfreesboro, Jean Faircloth married Douglas MacArthur at the Municipal Building in new york City on April 30, 1937. the couple made their home in Manila and their son Arthur was born there in February 1938. 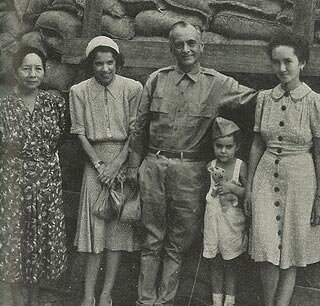 From Left to Right: Aurora A. Quezon, Jean Faircloth MacArthur, Manuel L. Quezon, Arthur MacArthur and Maria Aurora Quezon, during a reprieve in the daily bom­ bardment on the island fortress of Corregidor, 1942.

When the Japanese invaded the Philippines, Mrs. MacArthur and her son remained with the General throughout the withdrawal to Corregidor. For several months, Jean MacArthur and Arthur lived underground as the Japanese conducted daily bombing raids which resulted in the total devastation of the surface of the island fortress of Corregidor.

When President Franklin Roosevelt ordered MacArthur to leave the Philippines and take command of Allied forces in Australia, the family and key staff members escaped in four Pt boats under the command of Lieutenant John D. Bulkeley, who guided them through the Japanese blockade in heavy seas. two days later they reached the Southern Philippine island of Mindanao. the MacArthurs then flew from Mindanao to Batchelor Field near Darwin in Australia. At this point Jean MacArthur insisted that the family continue on by train rather than flying to Melbourne and ultimately to Brisbane.

Because of her quiet, unassuming manner. Jean MacArthur interacted well with the Australian people. She stood in lines at stores along with every- one else and was well known and popular in her own right. Jean MacArthur became one of her husband’s strongest assets and an ambassador of good will for the Allied cause.

Jean MacArthur remained in Brisbane until the liberation of Manila, where she and Arthur then joined him and remained by her husband’s side throughout the remainder of WWII, the occupation of Japan, and the Korean War. When the General was removed from his command in Korea in April, 1951, Mrs. MacArthur and their son accompanied the General on his return to the u.S. A triumphant tour of U.S. cities included Milwaukee where the General, with his family in attendance, received an honorary Doctor of Laws degree presented by Marquette university President Father Edward J. O’Donnell before 20,000 enthusiastic supporters on April 27, 1951 at Marquette Stadium. they were also present later that day for the program dedicating MacArthur Square in honor of the General’s military career spanning over 50 years. 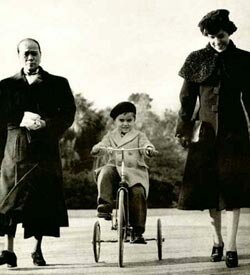 The MacArthurs took up residence in the Waldorf Astoria in New York City where, over the years, Mrs. MacArthur with her General hosted Presidents Dwight D. Eisenhower, John F. Kennedy, and Lyndon B. Johnson, along with dignitaries from around the world who came to pay their respects and seek advice from the General.

When General MacArthur died in 1964, Jean MacArthur stayed on at the Waldorf and was active in numerous philanthropic activities. She was also named Honorary Chairman of the General Douglas MacArthur Foundation in Norfolk, Virginia, and was intimately involved in the development of the MacArthur Memorial and Foundation. In recognition of her lifetime of service to her General and her country, the MacArthur Memorial named its new building the Jean MacArthur research Center. During this time, Jean MacArthur received other notable honors, including the Distinguished Public Service award from the Department of Defense, the Medal of Freedom – the highest award for civilian patriotic service in the united States – which was presented by President Ronald Reagan; and the Legion of Merit medal from the government of the Philippines.

Jean Faircloth MacArthur died at the age of 101 on January 22, 2000 and is buried next to her husband at the MacArthur Memorial in Norfolk, Virginia.