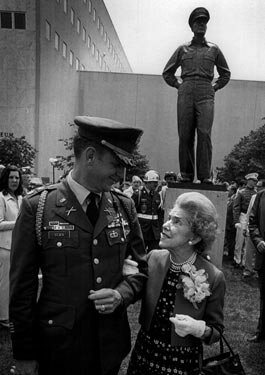 Lt. Col. John Putnam Otjen escorts Jean MacArthur following the unveiling and dedication ceremony on June 8, 1979 in MacArthur Square. The building behind the statue is the Milwaukee Public Museum.

The origin of the first MacArthur Memorial Week in June of 1979 can be traced back to Henry W. Woyach, the National Commander of the Catholic War Veterans. Woyach was also Chairman of the Veterans Board of the Milwaukee County War Memorial Center (WMC). Woyach had great admiration for General Douglas MacArthur and was concerned that although MacArthur Square had been dedicated in 1951 at a ceremony honoring General MacArthur nothing had been done since then to further recognize Milwaukee’s native son.

Woyach approached Chas Mulcahy and proposed that the WMC put together a plan to commission a statue of General MacArthur for MacArthur Square. Mulcahy at that time was Chairman of the WMC Board of Trustees and President of the Milwaukee County Historical Society (MCHS). Woyach and Mulcahy then contacted WMC Executive Director Donald E. Turek and MCHS Executive Director Harry H. Anderson. It had been a long time since Milwaukee erected a statue of any sort and there were serious cost considerations. Woyach, Anderson, Mulcahy and Turek nevertheless agreed to co-chair the steering committee needed to organize this initiative. Harry Anderson prepared a press release announcing the formation of the committee to commission a statue. When an article appeared shortly thereafter in the Milwaukee Journal another connection between MacArthur and Milwaukee surfaced.

Marie Z. Uihlein, the widow of Erwin C. Uihlein, read the Journal article and saw the possibility of becoming involved with the project in memory of her late husband. Douglas MacArthur and Erwin C. Uihlein had met in Manchuria in 1905. Lieutenant Douglas MacArthur, a recent graduate of West Point, and his father, General Arthur MacArthur, were representing the U.S. Army in Manchuria as observers of the Russo-Japanese War. Erwin Uihlein and his brother Robert Uihlein, sons of August Uihlein of the Joseph Schlitz Brewing Company, were in North China and Manchuria accredited as correspondents for Colliers Magazine and several American newspapers. MacArthur and Erwin Uihlein were just starting their careers and both were attached to units of the Japanese Army.

When General Douglas MacArthur returned to Milwaukee in April of 1951, he met with Erwin C. Uihlein in the Plankinton Hotel where MacArthur had lived in from 1897 to 1899 while he prepared for his West Point entrance exams. Their reunion was warm and cordial. Uihlein observed later that MacArthur in 1905 was “even then gathering information and experience that contributed to his present great understanding of the Orient and the Oriental mind.”

As it turned out, the meeting between Douglas MacArthur and Erwin Uihlein in Manchuria in 1905 helped make possible the MacArthur statue and MacArthur Memorial Week (MMW) in 1979. When Marie Uihlein saw the Milwaukee Journal article she contacted Harry Anderson. Remembering her husband’s relationship with MacArthur, Mrs. Uihlein made a commitment to provide the majority of the funding for the MacArthur statue and The MacArthurs of Milwaukee exhibit, which Anderson was then planning with the Milwaukee County Historical Society (MCHS). Thanks to the generosity of Mrs. Uihlein, the statue and exhibit became reality. Both the statue and the exhibit at MCHS were sponsored in memory of Erwin C. Uihlein by his wife Marie Z. Uihlein and family.

Sculptor and West Point graduate Robert Dean was commissioned to create the MacArthur statue. Harry Anderson led the initiative to plan and develop the MacArthurs of Milwaukee Exhibit at the MCHS and traveled to the MacArthur Museum in Norfolk, where he was able to secure artifacts for display as part of the MCHS exhibit.

Preliminary to the 1979 MMW, Anderson recruited Brig. Gen. LaGrande A. “Pick” Diller, US Army (Retired) to speak at the MCHS Annual Recognition Banquet on April 25, 1979 at the WMC. General Diller had been a staff officer with MacArthur from July of 1941 in the Philippines through to Japan. 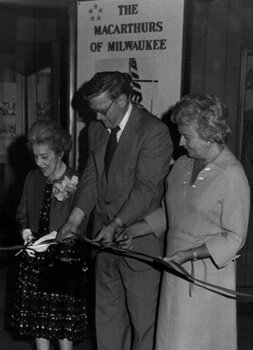 On June 8, 1979, Jean MacArthur cut the ribbon with Harry H. Anderson and Marie Uihlein opening the MacArthurs of Milwaukee exhibit at the MCHS.

The 1979 MacArthur Memorial Week followed in June. Jean Faircloth MacArthur accepted an invitation and agreed to participate in the planned activities. She joined the military parade, coordinated by WMC Executive Director Donald Turek, from the WMC to MacArthur Square where she unveiled the bronze 9½-foot MacArthur statue at the site where the General had spoken to 40,000 people on April 27, 1951. Henry W. Woyach was Master of Ceremonies for the statue dedication program with the invocation given by Father Edward J. O’Donnell, S. J., former President of Marquette University. The West Point Honor Guard, 32nd Division made The Presentation of the Colors followed by the Pledge of Allegiance by Eagle Scout David Bernards, Troop 118, Underwood School, Wauwatosa. Harry H. Anderson then presented remarks entitled The MacArthurs of Milwaukee, which are included in this booklet. Mrs. Erwin C. Uihlein and Mrs. Douglas MacArthur were introduced and County Executive William F. O’Donnell accepted the statue on behalf of the people of Milwaukee County.

Sculptor Robert Dean was introduced and a wreath was placed at the statue by Pedro Adriano and Dr. Miguel T. Galang on behalf of the Republic of the Philippines and the Filipino-American community of Milwaukee. A second wreath was placed by Eddie Jonokuchi on behalf of the Japanese American Citizen’s League. A group of Filipino-American children then stepped forward and placed a third wreath at the foot of the MacArthur statue. The program concluded with the National Anthem and a benediction by Father Frank Sanfelippo of Old St. Mary’s Church. Mrs. MacArthur came down from the platform and hugged the Filipino-American children as they surrounded her.

The MacArthurs of Milwaukee Exhibit 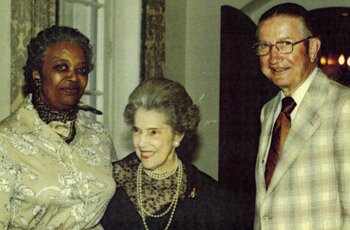 Throughout MMW, Jean MacArthur was escorted by Lt. Col. John Putnam Otjen, whose great–grandfather, Wisconsin Congressman Theobald Otjen, had appointed MacArthur to West Point in 1898. Col. Otjen had visited General MacArthur with fellow cadets for the General’s 84th and last birthday in January of 1964 at the Waldorf Astoria in New York City. When General MacArthur died on April 5, 1964, Otjen had carried the General’s five-star flag in Norfolk, Virginia in the honor procession and at the funeral service. Harry H. Anderson arranged, with the support of Milwaukee Congressman -Clement Zablocki, to have the U.S. Army assign Col. Otjen as the escort of Mrs. MacArthur in Milwaukee. 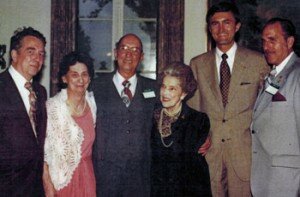 Mrs. MacArthur attended the Allied Veterans Council of Milwaukee County banquet on June 9, 1979 where her friend, U.S. Senator Harry F. Byrd, Jr. of Virginia, was the keynote speaker. Senator Byrd at the time was a member of the National Advisory Board of the MacArthur Memorial Foundation. Mrs. MacArthur also attended several programs at the WMC during the following week.

On June 12, 1979, Lt. Gen. W. Y. Smith, Assistant to the Chairman of the Joint Chiefs of Staff, spoke at the Rotary Club as part of MMW. The following morning, June 13, 1979, Mrs. MacArthur was present for the dedication of a historical marker at West Division High School, which Douglas MacArthur had attended as a special student preparing for the examination for admission to West Point in 1898. This marker was sponsored by the Wisconsin Chapter, Sons of the American Revolution. At noon that day, Major General Michael D. Healy, Commander Rediness Region V, Fort Sheridan, Illinois spoke to the Kiwanis Club as part of MMW. Mrs. MacArthur was also present that afternoon, June 13, 1979 for a dedication sponsored by the St. Andrew’s Society of Milwaukee of the historical marker at 1101 North Marshall Street, the site of the MacArthur family residence.

Although this was to be her last trip to the city, Jean MacArthur remained in contact with Milwaukee friends and acquaintances in the years thereafter. In 1984, she sent an first edition of MacArthur’s book Reminiscences, signed by both her and the General, along with a personal thank-you note to one of the organizers of the 1979 MMW.