After General MacArthur was relieved of his command by President Truman on April 5, 1951, invitations to events and ceremonies in the United States poured in. Governors, mayors, businessmen, community leaders and people across the nation expressed their admiration of the General and many agonized over the fallout between MacArthur and Truman while longing for a reconciliation.

From New York to San Francisco ticker tape parades were held and gifts and honors were bestowed upon the General and his family. MacArthur’s home city of Milwaukee welcomed the General enthusiastically on April 27, 1951. Local schools and businesses closed in anticipation of this historic event and, according to police estimates, nearly a million people crowded the motorcade routes to greet the General as MacArthur made his way from the airport to the Marquette football stadium, formerly located at 35th and St. Paul Ave.

‘The Rev. Edward J. O’Donnell S.J. served as President of Marquette University from 1948 to 1962. Father O’Donnell reflected in 1981 on some of the important events that had occurred during his thirteen years as President. In an article published in Marquette Today, he provides a unique insight into the MacArthur visit and the friendship, which continued when Father O’Donnell visited the General several months later in New York:

“When I think about the really exciting events that occurred during my 13 years as Marquette President, the tall, courtly figure of Gen. Douglas MacArthur inevitably comes to my mind.

“It was Frank Casey who suggested to me that Gen. MacArthur would be a natural to receive an honorary degree. His military career and devotion to duty were outstanding, his accomplishments notable, his personality colorful. Besides he was a native Milwaukeean. The General must have been pleased with our invitation because we received in reply a very long telegram. It expressed his pleasure and willingness to accept the degree as soon as his duties would permit. He was pressed for time, he said, but would be happy to come to Milwaukee and receive the degree at his first opportunity. That opportunity came faster than any of us expected. Soon after we received the telegram, Harry Truman fired MacArthur from the post in Japan and sent him a summons to return to the States.

“I shall never forget the occasion of his return to Washington and his famous ‘Old Soldier’ speech before the United States Senate. Called upon to give an account of his actions, he spoke with a facility and command not often found among old vets who had been in the field as long as he. The man was a scholar. He was also an orator.

“That day, Frank Casey and I were at the Pfister Hotel meeting with some Army officers with reference to MU’s acquiring an Army ROTC unit. We took time out and turned on the TV set to watch the homecoming. That was when the General gave his famous speech. I could not help but notice that the Army officers were dabbing at their eyes. MU got its AROTC unit pronto.

“It wasn’t long afterwards that MacArthur indicated his readiness to come to Milwaukee for the honorary degree. MU arranged immediately for a brief, colorful ceremony at Marquette Stadium. It was to be MU’s show – or so we thought. But we had reckoned without the people of Milwaukee who obviously felt the General, as a native son, belonged to them.

“The General’s plane arrived at Mitchell Field, and the entire city turned out to greet him. The populace greeted him with great enthusiasm. Everywhere the streets were lined with flag-waving, cheering people. April 27, 1951, was a day to be remembered in Milwaukee. The motorcade crept slowly up Wisconsin Avenue to the Stadium where 20,000 people roared their approval of a hometown hero’s return. Thus far, plans had proceeded as scheduled. On the official, bunting-draped platform erected especially for the ceremony, the hood denoting his honorary degree was placed across the General’s shoulders. He smiled broadly and stepped to the microphone. In the background, Mrs. MacArthur and  the couple’s son sat proudly watching. General MacArthur began to speak.

“No sound came from the mike. He tapped it smartly. Still no sound; the P. A. system had conked out! There was a frantic call to the Engineering School which produced instant results. The General began to talk. His words were gracious, his tone courtly. The crowd went wild! 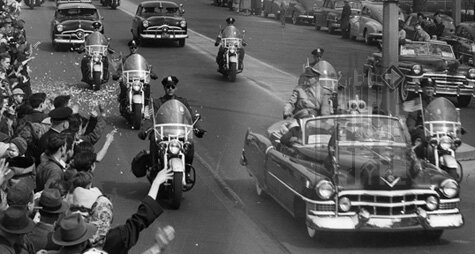 “Everything after that was anticlimax. Crowds pressed forward to see the famous man as the party left the stadium for a tour of the city. I rode with the General in his official car as we toured Milwaukee. He hadn’t bargained for this. Nor had we. He was very obviously fatigued. Yet, when the motorcade reached MacArthur Square, he acknowledged the greetings of the crowd graciously.

“I knew he was tired and anxious to get back to his plane. The city trip was too long, but he made a real effort to be open, friendly and candid with me. The weather conditions were becoming ominous. The General glanced at the sky periodically, and I could see that he was thinking he might not get off the ground if the fog closed in. In the end, he and his party did get to the airport before conditions became too bad and they did get back to New York as scheduled. The memory of a hero’s visit is vivid in my mind today!

“Six months later, I happened to be in New York and called on Gen. MacArthur. He invited us to the apartment where he and Mrs. MacArthur and young Arthur lived in the Waldorf Astoria Towers. It was evident that he was truly glad to see us. A remarkable two hours followed. The General was off on a monologue, a non-stop recitation of his own views on war. It was his view that the devastation of war must be stopped; war must be abolished. ‘This must be accomplished along with the preservation of United States military strength,’ he said. His words made good sense. 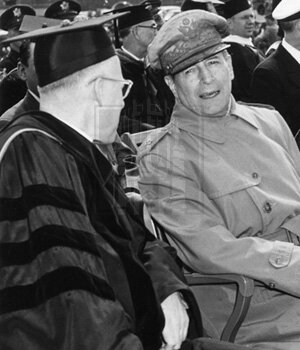 The story does not end there because new research has uncovered a decade of correspondence between MacArthur and Father O’Donnell. The usual exchanges were birthday wishes and special prayers for the General’s health, which were followed by reciprocal thank-you letters. As a member of the Board of the Rand Co., MacArthur once sent an electric razor to Father O’Donnell.

Father O’Donnell had been actively seeking General MacArthur’s papers for the Marquette Library and he traveled to New York again to meet with the General and Jean MacArthur at the Waldorf Astoria in 1952. At the time, the General seemed willing to donate his papers along with various artifacts to Marquette. The crown jewel of this collection was the sword of Tojo, which had been presented to General MacArthur during the surrender ceremony on September 2, 1945, on the USS Missouri in Tokyo harbor.

Marquette University was a special place for MacArthur and he expressed this to Father O’Donnell. MacArthur remembered that on his way to West Division High School in preparation for the West Point exams he had passed the University daily. According to the meeting transcripts, “He very definitely said that if he hadn’t gone to West Point he would have come to Marquette.”

Following the death of General MacArthur on April 5, 1964, the City of Norfolk, Virginia, stepped forward and offered to house the MacArthur papers and memorabilia in an original Colonial-era building which had been its courthouse. In addition, the General’s mother was buried there. And so the MacArthur Memorial came to Norfolk. Some years later, the MacArthur Memorial loaned artifacts to the Milwaukee County Historical Society for the 1979 MMW in Milwaukee.