MacArthur In The Phillipines 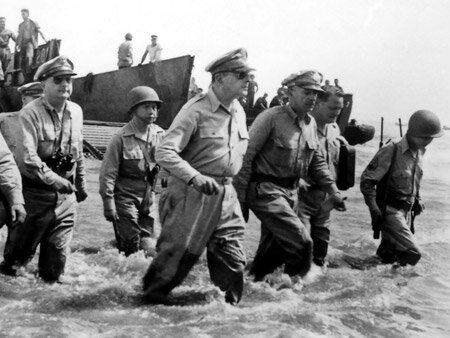 General MacArthur and his command staff wade ashore at Leyte Gulf. A jeep ­mounted radio had been positioned for MacArthur to broadcast his return to the Philippine people.

Following the surrender to the Japanese at Bataan and Corregidor, several groups of American and Filipino fighting men and women established guerrilla operations in the islands. For the remainder of the war, these guerrillas were supported and protected by the Filipino people. The guerrillas engaged in sabotage, fought the Japanese and established a spy network, which eventually was communicating Japanese military actions throughout the islands by radio to General MacArthur  in Australia.

The guerrilla network provided MacArthur with priceless information on Japanese troop deployments, location of aircraft, defense positions and supply depots. The network also carefully identified the locations of Filipino and American POWs. MacArthur’s forces knew exactly where to hit the Japanese and countless lives were saved in the process. When MacArthur arrived at Leyte Gulf, one of his first actions was to reach out to the courageous guerrilla network and the Filipino people. Japanese occupation of the Philippines was opposed by a successful guerrilla activity that -increased over the years so that by the end of the war, Japan controlled only twelve of the forty-eight provinces.

Guerrilla forces throughout the archipelago were composed of groups of U.S. Army Forces Far East and Filipinos who refused to surrender. The commanders of these groups made contact with one another and began to formulate plans to assist the return of American forces to the islands. General MacArthur formed a clandestine operation to support the guerrillas. By the end of the war, 277 separate guerrilla units made up of some 260,715 individuals fought in the resistance movement.

After MacArthur’s return, these groups became vital additions to U.S. operations such as the 6th Army Alamo Scouts, the 6th Ranger Battalion, and the Counter-Intelligence Corps that provided them with native speakers. These men would take part in daring operations to including the 1945 liberation of the POW camp at Cabanatuan, which was dramatized in the 2005 U.S. film The Great Raid.

Four hours after the amphibious invasion of Leyte Gulf had begun, General MacArthur waded ashore with his command staff. A radio transmitter on the beach allowed the General to speak directly to the people of the Philippine Islands, who had long awaited his return. [Listen]

I have returned. By the grace of Almighty God our forces stand again on Philippine soil consecrated in the blood of our two peoples. We have come, dedicated and committed, to the task of destroying every vestige of enemy control over your daily lives, and of restoring, upon a foundation of indestructible strength, the liberties of your people.

At my side is your President, Sergio Osmena, worthy successor of that great patriot, Manuel  Quezon, with members of his cabinet. The seat of your government is now therefore firmly re-established on Philippine soil.

The hour of your redemption is here. Your patriots have demonstrated an unswerving and resolute devotion to the principles of freedom that challenges the best that is written on the pages of human history. I now call upon your supreme effort that the enemy may know from the temper of an aroused and outraged people within that he has a force there to contend with no less violent than is the force committed from without.

Rally to me. Let the indomitable spirit of Bataan and Corregidor lead on. As the lines of battle roll forward to bring you within the zone of operations, rise and strike. Strike at every favorable opportunity. For your homes and hearths, strike! For future generations of your sons and daughters, strike! In the name of your sacred dead, strike! Let no heart be faint. Let every arm be steeled. The guidance of divine God points the way. Follow in His Name to the Holy Grail of righteous victory! 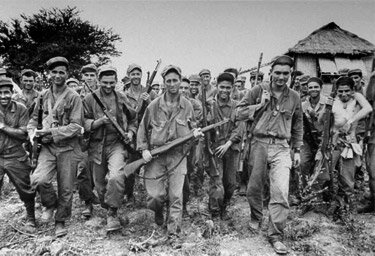 Soldiers of the 6th Ranger Battalion after the Cabanatuan raid with Filipino­-American soldiers assigned to the unit.

Filipino guerrilla forces supported MacArthur along with US naval forces under Admirals Nimitz and Halsey. A combined 282 ships engaged in the Battle of Leyte Gulf. The Japanese committed every ship available in an attempt to stop MacArthur because the Philippine Islands controlled the vital shipping lanes for oil and rubber from Indochina. Hence the lifeblood of the Japanese military was at stake. Admiral Halsey pursued a decoy element of the Japanese navy and was hundreds of miles away when an attack against MacArthur’s landing and supply forces began.

The beachhead was threatened by superior numbers and firepower but the U. S. Navy fought back with undersized anti-submarine destroyers charging point blank into the Japanese fleet. Aircraft were dispersed to the mainland to preserve them in the event of carrier losses. Japanese Admiral Kurita misinterpreted this as a preamble to a land-based air attack. He also believed that Halsey’s forces were soon to arrive although they were still hours away. In the smoke and confusion of Kurita’s victory he ordered his fleet to disengage and retreat through the San Bernardino Strait. The largest naval battle in maritime history was over and MacArthur’s ocean flanks and supply lines were secured. 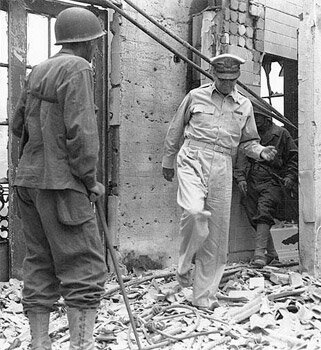 General MacArthur visits his peacetime residence, the Manila hotel, which now lay in ruins. Japanese forces destroyed this jewel city of the Philippines. The hotel has long since been rebuilt with a luxurious MacArthur Suite.

Battles raged for weeks throughout the rain-soaked Philippine islands, which made transportation slow and the use of airfields impossible. Carrier-based aircraft supplied the bulk of air support for MacArthur’s ground forces on Leyte Island. MacArthur knew the topography of the Philippines well, having spent many years on the islands, and this allowed him to continuously outmaneuver the enemy. His steady and systematic drive towards Manila ground down the often-confused Japanese forces. MacArthur’s amphibious landing of forces at Lingayen Gulf, just north of the city of Manila, fatally split Japanese forces into two defensive fronts.

During the march towards Manila, crowds of Philippine people greeted MacArthur’s command vehicle with flowers and wreaths. The affection was mutual and deeply personal. MacArthur’s forces finally reached the capital city and the conditions there were heartbreaking for the General. When MacArthur retreated to Corregidor in 1942 he had declared Manila an open city in an attempt to spare it the destruction of total warfare, yet this beautiful city suffered some of the worst devastation in all of WWII.

MacArthur’s leadership, friendship and advocacy for the people of the Philippines resonates to this day. Filipino communities in Milwaukee and elsewhere continue to testify to the importance of this man and his contributions to Philippine liberation and freedom.