MacArthur and The Korean War 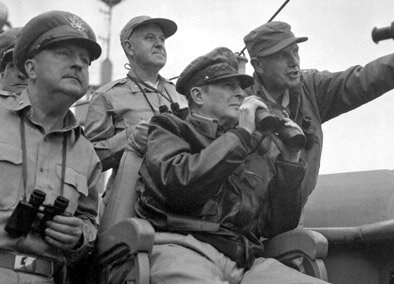 Communist forces breached the 38th parallel on June 25, 1950, and General MacArthur was directed by President Truman to take charge of US forces on the Korean Peninsula. South Korea had been deemed insignificant in terms of regional security strategy and largely written off by US foreign policy. The growing Cold War threat of a global communist takeover and heated debates between hawks and doves in the US brought the political struggles of Korea into the international spotlight. Four days after the invasion, MacArthur’s plane touched down on a South Korean airfield in the midst of a retreat by the outnumbered and outmaneuvered ROK forces.

The two sides battled in seesaw fashion over a defensive line at Pusan, while MacArthur planned a high-risk landing of forces behind enemy lines at the port of Inchon. The tides were historically high and there were only seawalls and piers where soldiers could embark. Every commander under MacArthur believed the landings so difficult as to be nearly impossible, but the General insisted that there would be few defenses at a naturally fortified place such as Inchon Bay. An amphibious assault here would face every obstacle and warning in the book, but MacArthur had more faith in the US Navy than did the Navy-itself.

The landing was successful, Seoul was liberated, and the Communists were pushed out of South Korea in just fifteen days. President Truman and MacArthur met on Wake Island on Oct. 15, 1950, to discuss the Korean conflict. They departed on good terms with Truman awarding MacArthur the Distinguished Service Medal. This would be their final meeting before a falling out of legendary proportions. When the Chinese invaded the Korean peninsula with an overwhelming force, MacArthur fought back brilliantly but, with the advent of nuclear weapons, sheer force of arms was no longer the deciding factor in warfare. Political calculations superseded battlefield considerations and this did not sit well with MacArthur. Truman and MacArthur differed over how to settle the conflict and on April 5, 1951 the President relieved MacArthur of his command.