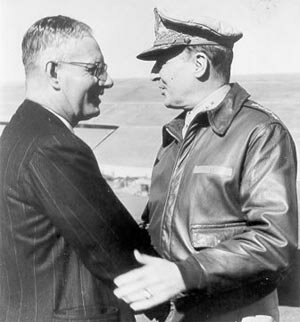 The war in the Pacific brought two unlikely men together. One of them, John Joseph Curtin, was a labor leader, labor journalist, Labor Party leader, and Prime Minister of Australia. The Japanese surprise attack on Pearl Harbor on December 7, 1941 changed the lives of both men and they brought the Australian and American people together as never before.

In the mid-1930s, MacArthur was appointed Field Marshall of Philippine armed forces with the charge of developing the defense of the islands. He formulated a strategy and plan which required modern weapons and expanded forces from the U.S. MacArthur also implemented a rigorous military training program for the Philippine army. These soldiers were later deployed to slow the Japanese onslaught in the Southwest Pacific. That delay provided valuable time for Australia to develop its own plan of defense. Unfortunately, the much-needed men and supplies were never provided from the U.S. with the result that the Philippines were not adequately defended.

Australia, at the same time, was divided between pacifists and those who favored conscription to enlarge the military and improve the defensive capabilities of the homeland. The election of John Joseph Curtin as Australian Prime Minister sixty days before Pearl Harbor decisively impacted the role of Australia in the Pacific War. Prime Minister Curtin, who in peacetime had been opposed to conscription and war, rose to the occasion when war was forced upon him. He never hesitated and developed a plan for an alliance that was to lead the U.S. and Australia to victory over Japan.

Third-term U.S. President Franklin D. Roosevelt agreed with Churchill that U.S. resources should be used primarily in support of England, which was the only remaining arsenal of democracy in Europe. In early 1942, three Australian divisions were serving under British General Bernard Montgomery, who was planning the pivotal battle of El Alamein against German General Erwin Rommel in North Africa. At the same time, a sense of panic was developing in Australia as the Japanese swept down the Indochinese peninsula.

Great Britain had historically assigned the Royal Navy to protect Australia, but when the British warships HMS Prince of Wales and HMS Repulse were sunk in the Southwest Pacific at the start of the war, Australia was left without naval protection. Curtin, knowing that Britain could no longer defend Australia, demanded that Churchill return the three Australian divisions from North Africa. The clock was ticking in early 1942 because the only sustained resistance to the Japanese in the region was the combined American/Filipino forces, which were fighting off wave after wave of Japanese land and air attacks on Bataan and Corregidor.

Roosevelt and Churchill agreed that the U.S. would defend the entire Pacific area including Australia. When Curtin was informed of this decision, he called a special cabinet meeting on February 21, 1942 and it was agreed to withdraw the demand for the return of the troops if an American General was named Supreme Commander in the Pacific theater with assurances that American troops would follow. First Churchill and eventually Roosevelt concurred. They agreed on MacArthur for the new command. The Japanese at that time were in New Guinea and were about to start bombing raids on the Port of Darwin as well as other targets in northern Australia in preparation for the invasion.

MacArthur would have been left to die at Corregidor had he not been named Supreme Commander in the Pacific. Roosevelt ordered MacArthur to leave Corregidor and go to Australia. MacArthur, his family, and key staff members ran the Japanese blockade by PT boat and flew from Mindanao to Australia where he assumed command. He then met with Curtin and they agreed MacArthur would fight the Japanese and Curtin would mobilize the homeland. MacArthur was not intimidated by the immensity of the Pacific theatre. He quickly mastered the intricacies of Australia’s 2,900 mile eastern coastline and studied the islands between Australia and the Philippines. He then developed his island-hopping strategy that called for immediate offensive action.

The Australian military recommended their country be defended by allowing the Japanese to land in Northern Australia, which would be abandoned south to what was called the Brisbane Line. MacArthur rejected this idea in favor of his New Guinea offensive that ultimately involved eighty–seven successful amphibious landings.

MacArthur’s forces gained control of critical passageways and established bases from which to attack the Japanese, all the while moving north to bring American bombers within range of Japan. His strategy prevented Japanese soldiers from ever setting foot on Australian shores.

At the same time Curtin took steps to expand Australia’s industrial and agricultural production capacity to supply the materials needed for a protracted war effort. Initially, more supplies came from Australia than the U.S. In addition to expanding production of war material, Curtin insisted on rationing war-related goods and adding taxes on luxury items such as alcohol and entertainment. Curtin also recruited MacArthur to assist in the sale of Australian war bonds and the General even purchased some himself. 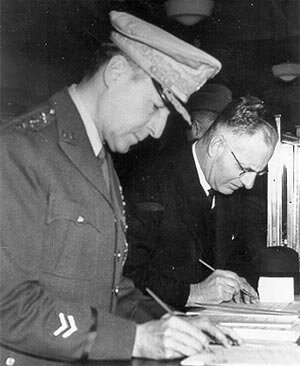 General MacArthur and Prime Minister Curtin purchase Australian Liberty Bonds in a public display of patriotism and solidarity between the two allied nations.

The MacArthur/Curtin relationship was based on trust and a sensible division of responsibility. In MacArthur, Curtin gained an ally who wanted not only to protect Australia but also to go on the offensive against Japan. MacArthur found in Curtin a charismatic leader who was able to mobilize the Australian people. Together the two men laid the foundation for allied victory in the Southwest Pacific.

Although Curtin passed away a few months before the unconditional surrender of Japan, their alliance brought the U.S. and Australia together permanently as trading and defense partners. In 1951 the ANZUS Security Treaty was signed, linking Australia and New Zealand to the United States in matters of defense. The treaty originally covered only actions in the Pacific region, but over time has taken on a worldwide character. In 2004, the Australia-United States Free Trade Agreement was signed.

In only about three years the General and the Prime Minister, working in concert, transformed Australia from a country which considered itself little more than a piece of the British Commonwealth into a prosperous nation with expanded industrial and transportation capabilities. The MacArthur/Curtin alliance also transformed the RAAF into a modern air force capable of mounting air operations across a quarter of the globe. The Royal Australian Navy, which had been just a small part of the British Imperial Fleet, grew in confidence and greatly increased its capabilities. Military hospitals were built to treat battle casualties, malaria, and other tropical diseases as well as more common ailments.

Almost all these advances came not only as a result of the War in the Pacific, but also because Australia, unlike most other Pacific nations, was never invaded. Thanks to MacArthur’s plan to go on the offensive rather than just defend, Australia never had to rebuild a war-torn economy. The alliance of Curtin and MacArthur created a model civilian/military partnership that was successful in both war and in peace.